Trending Issues in Music Copyright Law
In 2001, in A&M Records et al v. Napster, the most significant judicial ruling of the digital music age, the U.S. Court of Appeals for the Ninth Circuit held that peer-to-peer (P2P) file-sharing services were liable for copyright infringement of music traded on P2P sites and that the fair use doctrine – the limited use for certain limited purposes of unlicensed copyrighted materials which does not adversely affect the market for the work – generally would not serve as a defense for copyright infringement of music.

The Napster case was initiated by a Recording Industry Association of America (RIAA) 18-plaintiff consortium of music industry companies, including the “Big Four” – Sony Music Entertainment, Universal Music Group, Warner Music Group and EMI. After its success in the Napster case, the RIAA embarked on a mass-litigation strategy of attacking both the supply and demand ends of the spectrum of music copyright violations by suing corporate P2P infringers and individuals illegally downloading music via P2P sites. Between 2002 and 2008, through its member companies, the RIAA sued more than 20,000 persons for music copyright infringement, seeking the statutory damages available under federal copyright law of $750 to $30,000 per song in non-willful cases and up to $150,000 per work in willful cases (typically where the infringer engaged in mass resale of the stolen music). In willful cases, the infringer can also face criminal prosecution involving fines of up to $250,000 and/or five years imprisonment.

In a 2005 decision by the U.S. Court of Appeals for the Seventh Circuit that reflected the typical outcome of copyright cases against individuals – BMG Music et al v. Cecilia Gonzalez– a college student who had illegally downloaded 1,370 songs through the KaZaA P2P network was held liable for $22,500 in statutory damages. The award could have been significantly higher had it not been for the decision by the plaintiffs to seek the minimum of $750 per infringement for only 30 of the pirated works. Application of the high end of the non-willful statutory scale – $30,000 per violation – for each of the 1,370 illegally downloaded songs would have resulted in a judgment against Gonzalez of $41.1 million.

In another representative decision handed down by the U.S. Court of Appeals for the Fifth Circuit in 2010 – Warner Music Group et al v. Whitney Harper – a former high school cheerleader from Texas was ordered to pay $27,750 for having illegally downloaded, when she was 16-years-old, 37 songs from the LimeWire P2P site. The appellate court rejected Harper’s asserted defense that she didn’t know anything about copyright law and that she thought P2P file sharing was a legally permissible activity like listening to music on the radio. The U.S. Supreme Court subsequently denied certiorari and refused to hear an appeal of the ruling, with
one of the key lessons to be learned from the case being that ignorance of or confusion regarding copyright law will not serve as a defense to exonerate infringers.

More recently, the RIAA and its member recording companies have begun to focus on infringement issues related to the use by tens of thousands of college, high school, middle school and youth-level cheer and dance teams of music to accompany their routines, productions often involving the incorporation of unlicensed songs, remixes or mashups, with the types of performances ranging from those that take place live at athletic contests, to those occurring at the rapidly expanding number of local, state and national cheer and dance competitions, to those happening at cheer and dance camps, to those viewable online via live streaming or
other digital posts, and to those recorded on DVDs sold to squad members, parents and school community members to commemorate cheer and dance performances.

For instance, in 2014, in a lawsuit filed in federal court in New York – Sony Music Entertainment v. Extreme Traxx Productions et al – the plaintiff alleged that four music-editing companies and two individuals were selling to cheerleading squads across the country unauthorized versions, remixes and mashups of songs by a diverse range of Sony artists including Beyonce, Christina Aguilera, Kenny Chesney, DJ Khaled, Miley Cyrus, Adele, Michael Jackson, Shakira, Mariah Carey, Britney Spears, Celine Dion and Elvis Presley. Sony sought the statutory maximum from the defendants for willful infringement of $150,000 per song and the case was settled out-of-court for an undisclosed amount.

It is illegal for a cheer or dance team to make use of any of these rights – reproduction, alteration, distribution, performance, display or digital transmission – without express, written permission from all holders of copyright in a song. The fair-use doctrine, allowing for limited noncommercial use of copyrighted material for purposes such as teaching, research, scholarship, criticism, comment or news reporting, generally does not serve as an effective defense in music copyright cases and should not be relied upon by school administrators or squad sponsors who may mistakenly believe that fair use applies simply because the cheer or dance team is affiliated with an educational institution.

The express, written permission needed for a cheer or dance squad to exercise any of the above-described bundle of rights will require the team to obtain one or more of the specific types of licenses necessary for the grant of that right by its holder to the squad. There are five primary types of licenses that will apply to cheer and dance squad use of music: master licenses, synchronization licenses, performing rights licenses, mechanical licenses and compulsory mechanical licenses.

The process for school administrators and cheer or dance team sponsors of obtaining the required licenses can be a complicated and time-consuming endeavor. To assist squads with the licensing process and to reduce their own potential copyright infringement liability, national governance organizations such as USA Cheer and Varsity Spirit have jointly compiled a list of authorized providers who have been vetted and who can provide not just the original versions of songs and customized remixes, but also the necessary licenses for the specific, intended uses of music by the team (see www.usacheer.org/presssafety/music).

Recommendations for Administrators and Squad Sponsors
If a cheer or dance squad wishes to use a single song as its music for an entire performance routine, a receipt for a legally purchased copy of the track will suffice as a license. No alterations to such a recording are allowed, other than minor edits for timing purposes only (e.g., ending the song prematurely, eliminating a bridge or removing a chorus). The song may not be remixed by adding sound effects, altering the tempo of the music or mashing up the song with other recordings.

If a cheer or dance squad wishes to play more than a single song for a routine and to use a variety of recorded tracks at an athletic event or cheer competition, a license is required from a PRO representing the artists involved. ASCAP, BMI and SESAC provide annual blanket licenses that cover such performing rights (see www.ascap.com, www.bmi.com, www.sesac.com).

(The NFHS is currently working with all Performing Rights Organizations to make it easier for schools and state associations to obtain a Public Performance License.)

If a cheer or dance squad desires to create custom remixes or mashups to accompany its routines, proof of licensing for all songs, sound effects and voiceovers used in the new piece must be obtained from a firm on the preferred providers list or from the editor who created the new work (the editor does not necessarily have to be a firm or person on the authorized providers list, but the editor should be required to provide proof of purchase and proof of licensing from a preferred provider for all songs, effects and voiceovers included in the new mix).

If a cheer or dance team wishes to use an original recording created by a non-commercial music provider who does not operate a business and is not engaged in the business of music (e.g., written and recorded for the squad by a non-professional musician who makes no copyright claims to the work), it should create documentation through which the creator assigns all applicable rights to the squad.

If a cheer or dance squad will be performing at a camp or competing in a local, state or national level competition, it should transport to the event hard-copy documentation of all licenses, proofs of purchase from authorized music providers, paperwork from music editors and receipts for individually purchased songs. School administrators should ensure that cheer and dance squad sponsors maintain a well-organized archive of all music copyright paperwork in the event that a legal dispute arises in the future.

School administrators should consider requiring the use of the NFHS Copyright Compliance Database (www.nfhs.org – under Resources), a tool created and made available to all NFHS institutions in 2017 to assist with the copyright verification process for all uses of music by schools. A cheer and dance sub-account can be created within any school’s main account. Some state associations are already mandating use of the database for participation in state-sanctioned events (e.g., Iowa, Oklahoma, Colorado and Idaho), with many more likely to implement such a requirement in the future.

School administrators should consider requiring the completion by all personnel who use music in their classes, programs and activities, including cheer and dance team sponsors, of the free NFHS course titled Understanding Copyright & Compliance (www.nfhslearn.com/courses), produced with the assistance of the National Association for Music Education and USA Cheer, and launched in September 2017.

Finally, because of the expansive and complicated nature of copyright law as it applies to the use and performance of music, school administrators and sponsors of cheer and dance squads should consult district legal counsel to ensure that strategies developed and implemented to address copyright compliance are legally sufficient in their states and regions of the country. 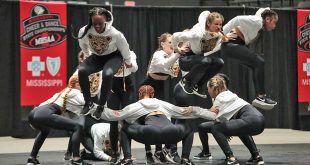