Mr. Boatner — who won a total of 19 state championships in baseball and slow-pitch softball over 50 years before his retirement in 2018 — was among 12 inductees from across the country chosen through a process overseen by the National Federation of State High School Associations. The ceremony was held June 30 at Indianapolis. His 1,202 baseball victories are the most in Mississippi and rank fifth nationally.

“I had a Babe Ruth League baseball coach in Meridian, Mississippi put his arm around me and tell me: ‘Boatner, if you work hard, I believe you can become a professional baseball player. I said from that point on that I would never let lack of work keep me from becoming what I wanted to become.

“At West Lauderdale, we wanted to be the hardest working team around. We came up with ways to outwork people. Like I told the kids, ‘A winner thinks of ways to get to work. A loser thinks of ways to get out of work.’ It’s easy for us as coaches to say, ‘It’s too cold today or it’s raining too much.’ We’d find a way to practice before school or practice on the asphalt or practice in the gym at night.

“We did it with the same philosophy in softball. The girls bought into it as well as the boys. I had a softball player say way back when, ‘The hotter it is, the harder you work us.” I said, “I know, and that’s how we can tell what kind of shape you’re in.’

“People keep saying kids have changed. But I was at one school for 45 years. We had the same rules that last year as we did the first or the second year

Mr. Boatner is the ninth NFHS Hall of Fame selection from Mississippi. Previous inductees include: 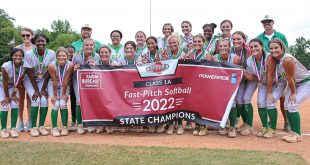