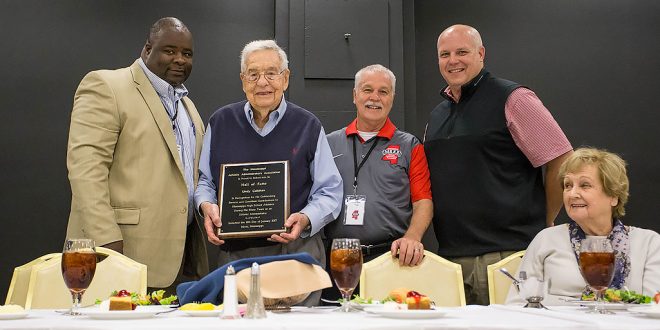 BILOXI — Lindy Callahan, a founding father of the Mississippi Association of Athletic Administrators, was recognized Jan. 12 as the organization’s first Hall of Fame inductee.

Mr. Callahan was the athletic director at Gulfport High School from 1955 until his retirement in1992.

“You didn’t need a committee to select him,” said Woody Barnett, who was officially hired as the MAAA’s first executive director in September. “If you’re going to start an MAAA Hall of Fame with one member, then it was going to be Lindy Callahan. Back when I was a new athletic director, I found out that our (athletic) handbook was a copy of a copy of a copy — and all of those came from one source. They had Lindy Callahan written over each one. We added some things as times changed, but basically it contained a lot of thoughts and ideas that came from Gulfport.”

Mr. Callahan and retired MHSAA executive director Ennis Proctor launched the MAAA some two decades ago to help member schools and athletic directors deal with a growing and ever-changing landscape for high school sports in Mississippi.

Thursday’s induction at the banquet luncheon was just the latest in a long line of honors for Mr. Callahan, who received similar Hall of Fame accolades from the Mississippi Association of Coaches (1977), National Federation of State High School Associations (1995), National Council of Secondary School Athletic Directors (1996) and National Interscholastic Athletic Administrators Association (2009).

“I am so honored and so proud of this award today,” Mr. Callahan said. “ I love all the coaches and athletic directors. They’ve been really special to me over the years.”