The MHSAA expects student-athletes, coaches, and game officials to conduct themselves respectfully and courteously. Disrespectful behavior in the playing area or the sidelines can result in an ejection. As has been the case in the past, profanity directed at players or officials is a penalty and an ejection as well.

The MHSAA has empowered officials to step up their enforcement surrounding bad behavior and language. They have also requested coaches’ help in getting the message about behavioral expectations to their assistant coaches, players, and fans.

Coaches and administrators are expected to role model excellence in their behavior on the sidelines. There will be a continued strong emphasis on positive behavior models and professional conduct between coaches and game officials. There will be procedures for questioning an official’s call and stiffer penalties if those procedures are not followed in most sports.

The above provisions have always been MHSAA rules. By spotlighting these rules, coaches, officials, players, and fans are educated about the bad behavior and poor sportsmanship in and around the playing arena. It is also to inform all interested parties that sportsmanship and decorum issues will be dealt with stringently. The MHSAA continues to empower and charge game officials to enforce these rules strictly.

We know that if all players, coaches, officials, and fans work together towards a common goal of exhibiting good sportsmanship respectfully, we can definitely impact the lives of student-athletes.

If an assistant coach is in the dugout contesting a call- Restricted to the dugout.

No coach may come onto the field or the home plate area to contest a call.

The head coach may come to the respective foul line in front of their dugout, midway between home plate and first/third base, to confer with the crew chief and base umpire (if necessary to explain the call) to make an appeal/protest.

This appeal/request must be made professionally.

When a ruling is given, the appealing coach must return to the dugout.

If the call is overturned, the opposing coach may come out to the foul line in front of their respective dugout for an explanation without penalty.

If the appealing head coach questions the call or is unsporting in his/her conference, a warning will be given.  This is to be recorded by the crew chief.

If the conversation/action of the appealing coach warrants, restriction to the dugout or/ejection will be given. This is to be recorded by the crew chief.

If the conversation/action of the appealing coach warrants, an immediate ejection can occur.  The 3-tier system of warn/restrict/eject is not mandatory.

Any player displaying verbal or physical dissent to an umpire

1st offense – ejection from the contest

Do not cross the baseline onto the field – automatic ejection.  Remain in foul territory.

Umpires will come to the foul line, in fair territory, socially distancing to communicate with the coach.

Only the Head Coach can request this meeting with the umpires.

If the Base Coach enters the field – automatic ejection.

Upon completion of the discussion between the Head Coach and umpires, Head Coach immediately returns to his/her position/dugout. 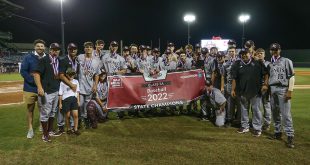